Rather than hunt alone, the Old Duck Hunter said he needed “a good pair of eyes” to share his blind on this cold December day.

Almost as if by feel, he maneuvered the ancient, battered aluminum boat through dark winding channels. His mind’s eye remembered these familiar twists, snags and channels after 70 years of running this backwater. These eyes dodged trees that weren’t even growing when he hunted this swamp as a child. Ahead, something lifted from the water with whistling squeals.

“Wood ducks roost over yonder,” he said nodding his head in the direction of the unseen sounds. “Probably what you heard. They always get up early in the morning.”

A good pair of eyes! He didn’t need eyes; he “feels” ducks. 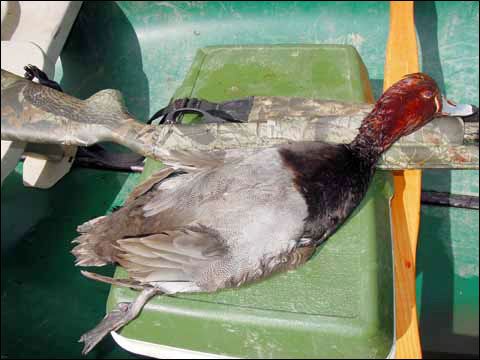 A drake redhead shows the result of a successful hunt.

Through the moonlight, a dark shape sputtered across the water, spooked by the antiquated whining outboard. It kicked spray with its feet as it ran for safety.

“Coots. They’s plenty around here,” the Old Duck Hunter said. “Always flock up around this bend. Don’t nobody really fools with ‘em much.”

With a twinge of scarlet showing in the east, we entered the blind. The Old Duck Hunter nimbly docked his battered flatboat under the floating blind. We climbed into a blockhouse surrounded by about 100 decoys and painted black bleach bottles, which also fool fast-flying ducks into believing many of their kind sit safely here. From across the swampy lake, a stout breeze nipped our faces, causing a slight shiver.

“They call this the Pothole Blind,” he said. “It don’t look like much now, but it’s huge compared to years ago. Years ago, it weren’t nothin’ but a wide spot between trees in the swamp. I kilt my first duck here with a borried old side-by-side shotgun in 1930. See ‘em stumps? They was green and alive back then. Now, all the trees are dead and it’s a main creek channel.” 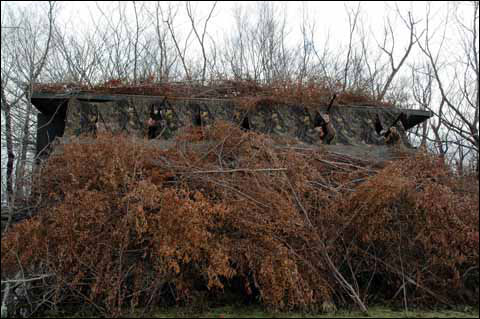 Hunters fire at ducks approaching this blind in a wooded slough.

The Old Duck Hunter built this blind, a shooting platform floating on pontoons, about 40 years earlier and hunted it every winter since then. Chickenwire walls raised to the height of a man’s eyes held browning pine branches and other plant material. A plywood roof lumped with pine boughs partially covered the backside, providing some shelter from the elements if necessary, but allowing four standing hunters ample room to shoot. Two benches offered comfort. A small heater held the biting cold at bay. 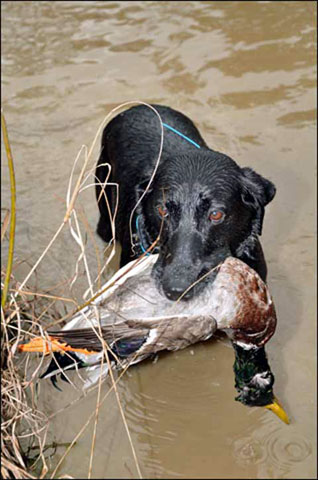 “My daddy used to hunt this spot,” he said. “He used to take me when I was just a child. I played in the bottom of the blind whilse he shot ducks. Back then, he and my uncle drove a Model T Ford through the swamp. They didn’t control the water level back then and it was more dry ‘cept durin’ spring floods when water on the Mississippi River backed up. You couldn’t get down there with a four-wheel drive truck now. They rowed a rowboat out c’here and shot sacks full o’ ducks. Nobody much cared ‘bout no limits back then. In was The Depression and we were hungry, but we always had ducks to eat in the winter.”

To the East, the rising sun backlighted woody skeletons of gnarled old cypress trees. Wood ducks whistled down the treeline well out of range. They weren’t interested in our decoys. They had places to go. 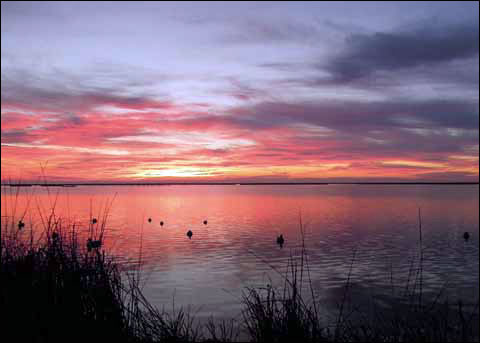 Sunrise on the marshes of Cameron Parish in southwest Louisiana.

Down the lake, every 300 to 400 yards, similar brown and gray pine blockhouses anchored more enormous decoy spreads like the head of a floating octopus. Several sat empty this misty morning. Shots and faux quacks erupted from others, telegraphing to fowl and human, the appearance or disappearance of ducks.

A small flight of ducks, perhaps teal, shot down the lake out of range. They made a few hurried passes and settled undisturbed into a huge flock of decoys guarding an unoccupied blind. Perhaps, they knew where hunters lurked.

“You have to use a lot of decoys because of the competition,” the veteran hunter explained. “We could always get limits back then because we didn’t have any competition. We only used a couple dozen decoys. That’s all we needed. Then, people started puttin’ out more and more decoys. Now, we have to use something like 250 decoys and another 150 jugs.” 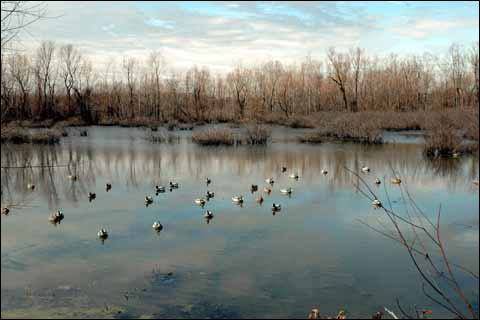 Decoys wait for action in a wooded slough.

Beneath a rumbled, faded camouflaged hat, two slate gray eyes, now hidden behind thick bifocals, scanned the fog of today and penetrated the fog of time. What were they seeing? Were they reaching across the decades to long ago hunts and other misty mornings? Mediocre hunts tend to grow into great hunts after more than seven decades.

“Back when my daddy hunted this bottomland, he used lead shot and black power,” he remembered. “Today, the federal gubment makes us use steel shot. I never much cared for steel shot, but it’s the law. We don’t have no excuse for shooting over the limit like we did back in The Depression. Here come two; keep down,” he barked.

Where? I didn’t know. I couldn’t see them. A good pair of eyes! 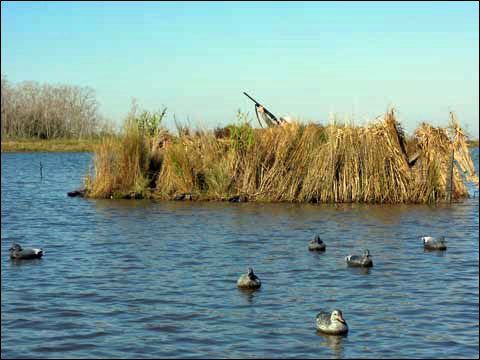 A hunter takes a shot at incoming ducks during a marsh hunt.

Two ducks shot past the blind well out of range until the Old Duck Hunter pulled out a battered wooden mallard call and began playing a tune only a duck can comprehend. Two dots over the trees made a wide sweeping arc and headed directly for us.

As the ducks flared over the decoys, we shot. I missed three times. Next to me, the Old Duck Hunter’s pockmarked double-barrel belched once, bringing down a greenhead, the first of several it claimed this morning. We would have duck to eat tonight at the houseboat.