An Open Letter to Women Wingshooters When an unsolicited email crossed our desk, we felt compelled to publish it (of course with permission from the author). The email, originally sent to NSCA Level II instructor, Elizabeth Lanier, captures the spirit of a unique all-woman upland hunt – basically giving the rest of us a rare glimpse into the camaraderie and exhilaration that women can enjoy when they decide to leave the guys behind and head out into the fields with guns and dogs.

The author, Anne Kania, stumbled into the “Glamour and Gun” hunt quite by accident. She describes her own sense of trepidation that many other women may feel when finding themselves among other women hunters who are new acquaintances.

Two extraordinary women were behind the organization of the hunt. Mindi McNab, owner of Highland Hills Ranch, set out to launch an initiative to draw more women into upland shooting. She turned to shotgun instructor and women’s shotgunning advocate, Ms. Lanier, to support the event through education, enthusiasm and good old-fashioned, down-home, raucous fun.

The hunt took place at Highland Hills Ranch January 27-30, 2012. As the host, Ms. Lanier brought the same brand of enthusiasm to the event that has made her group, The GRITS (Girls Really into Shooting), so popular.

Ms. McNab got the idea after realizing that more and more men brought their wives along to enjoy the amenities of Highland Hills Ranch while they went out shooting and socializing. Not all of the women hunted, however, and Ms. McNab saw that she could provide them with an all-women upland experience that had the potential to open new horizons for them. “I wanted it to be an environment where women felt comfortable,” she explained. “I wanted this to be something that was confidence-building with no pressure on women. I wanted to also offer this, not only to seasoned shooters, but people who dabble in it in order to increase their skills. And have a woman instructor.”

So Highland Hills Ranch’s first all-women hunt took place. It was such a success that another one is scheduled for January 31 – February 2, 2013.

The Glamour & Guns weekend was a surprise Christmas gift from my husband, Bruce. I was thrilled to be going back to Highland Hills Ranch, but…by myself? With a bunch of women? A bunch of glamorous women…. Yikes, how intimidating. On the other hand, it would be an adventure. No question that I would drive, along with my two “girls,” dogs Sam and Violet, rain, hail or snow. My feeble attempts to recruit human companions fell on deaf ears.

At least I could call Elizabeth beforehand to get to know her...and what a sympathetic, practical, friendly and positive person she turned out to be. I became very excited by the prospect of her excellent coaching, though not at all reassured by her travel tales of previous women-only hunts. I was sure I was going to be a wuss.

The first thing I noticed as we gathered was the excitement level, expressed gleefully and often (by the others), about being there, whooping at all the birds we passed on the way up the drive. Had these women never seen a pheasant before?

As each of us donned our gear, I was very curious to see what guns we'd all brought, and (oh woe) what everyone was wearing. Wow, these girls had really thought through their personal style in the field, and not just settled for what the men were wearing, as I had. They were gorgeous and practical. Dubarry boots were de rigueur and they looked smashing! One of the highlights of the weekend was this sartorial inspiration, and the chance to spruce up my own image by buying some beautiful tweeds from Good Shot Designs, modeled throughout the weekend by Lyndall. I drew the line at hunting in make-up – till my roommate Bev pointed out the SPF protection aspect. Made me think twice. And, after all, beauty is a choice.

As the guns were set in the racks my own “blonde bombshell” was much admired, with its custom stock in a honey-colored maple. It was obvious from surveying all the compromises (Jones butts, leather comb raisers) that the standard gun sizes don't fit us gals, and when they tried mine on, there were some “aha” moments. I predict some business in store for the Mike Lupolds of the world! A beautiful gun that fits is what every girl wants and deserves.

Ok, so moving on to the business end: could we shoot? Did we know which end of a pheasant was which? Let me tell you, this was a group of serious shooters, every bit as good as our male counterparts, in case it crossed your minds to wonder. Many of the group had taken lessons with Elizabeth, and it showed. I was pleased I held my own, but still had plenty to learn, especially those high crossers. I found Elizabeth to be a really good coach, easy to understand, and she gave me a few practical drills and a paradigm shift which I can't wait to practice on some clays.

HHR has a policy of placing hunters in small groups of 2 or 3, and I was assigned to Marlene as my hunting buddy - a very compatible choice- with Scott as our guide. Day one we shot 10 pheasants, 20 chukar and a couple of quail, supported by some great dog work from Scott’s pointers and my own labs. Day two was a  little lighter in the bag (for me, at least), but Marlene got a well-deserved grand slam of all four species – the above plus Hungarian partridge. High-fives, well-dones, yet knowing that if Debbie or Elizabeth had witnessed this feat you'd have heard the whooping way over in Portland! We walked for miles and shot at dozens of birds, these same birds that were lining the roads when we drove by but were predictably very cagey around pedestrians. It was real hunting!

For all, I was a bit on the reserved side, I did love being around expressive women who were having a great time and showing it!

I have been a bird hunter for 5 years, and have hunted often and hard. This year, I bagged 22 rooster pheasants off our 300 acre property, and a bunch of snipe and early-season ducks. Most times, I hunt with Bruce, who tends to be silent and intense, and very much the hunt-master. If my dogs get out of line he usually lets me know it. I love hunting with him, nevertheless, and I love hunting with our friends, almost always male, who are perfect gentlemen, avid hunters and good storytellers. They've become very special friends, either through morning conversations in the duck blind, or over after-dinner drinks by the fireplace, if not in the field itself.

So, when all's said and done, what was the intrinsic value of this women-only hunting weekend?

The biggest thing I got out of it was the level of confidence I felt: to be there in my own right, exercising my passion and skill as an independent and competent shooter; running my dogs without someone “managing” me, feeling part of the group and not – real or imagined – an outsider; not  wondering what the men thought about shooting with a woman and feeling the need to impress them or defer to them! I shot better than usual, didn’t hesitate on shots so much. The fact that I felt so comfortable right away was definitely due to the openness, warmth and inclusiveness that is so special to women. It drew me out into the open more.

The conversation around drinks and dinner was so different with women! Dennis remarked on how we handled the introduction process, where we were after everyone's life story, wanted to know each person intimately, not just a few perfunctory facts. By the end of dessert we’d done three people! The conversation was inclusive, deep and fun. We are keeping in touch now via email. I consider this group of women my new friends and I would be honored to hunt with any one of them again. We want other women to have this experience, and I plan to be there at the next one, with maybe three women friends to bring into the group.

I’d like to say a big Thank You to Mindi, co-owner of Highland Hills Ranch, who worked hard to bring this about, and to Elizabeth for her encouragement and commitment to making it so successful. And to Bruce, who suspected long before I did that I'd get so much out of it! The lodge at Highland Hills Ranch. 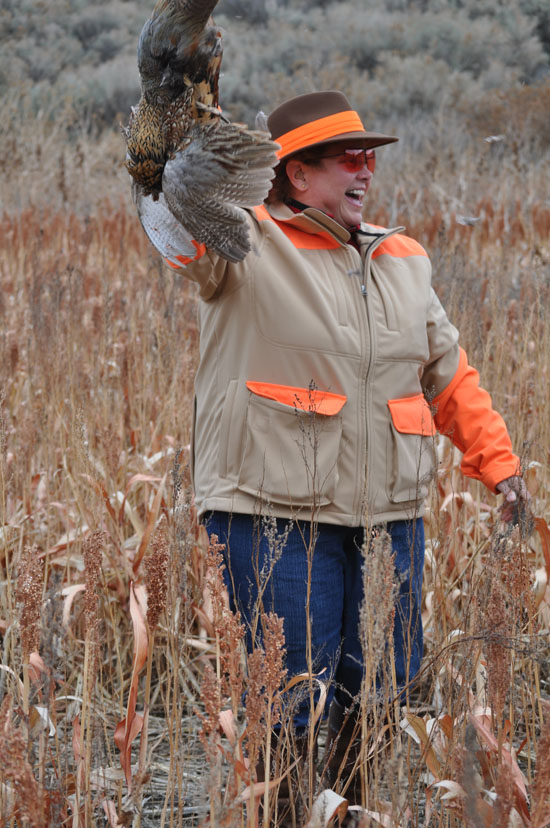