How many times has this happened to you?

After a successful sporting-clays lesson, the very next time you shoot with friends, step into the station supremely confident, drop two shells into your shotgun, exercise your pre-shot routine and call pull, everything you’ve learned during that hard-earned, one-hour session has gone out the window as you watch the target continue its trajectory unmolested — a scenario that repeats itself over and over during a day of intensifying frustration.

What the heck went wrong?

Although the instructor helped you overcome a problem or two, his entire body of knowledge left with him when he turned the key in the ignition and drove away with your check for $125. 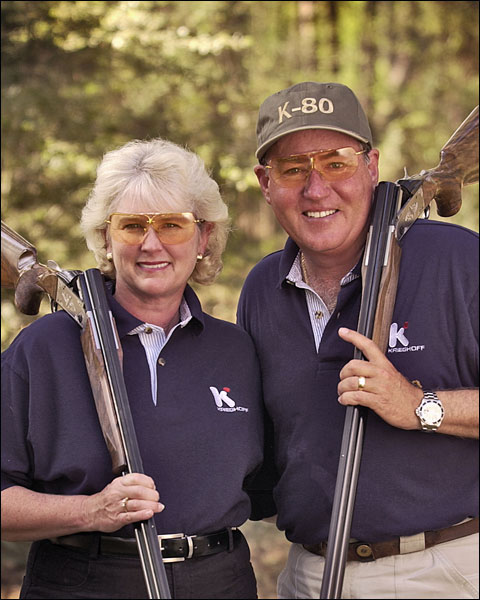 “At $33 dollar per month for the OSP Knowledge Vault, you’re saving a bundle compared with spending money every month on instructors,” said Mr. Ash. “And let me ask you, do you genuinely believe any shotgun instructor is going to take your phone call at 11 o`clock at night when you have a pressing question? Good luck with that. The OSP Knowledge Vault makes house calls 24/7 — just log in for tips and lessons from Vicki and me about overcoming all kinds of performance problems and situations.”

The OSP Knowledge Vault is the latest advance from the husband-and-wife duo who have defined the educational and marketing paradigm in the shotgun sports. You would be hard pressed to find any other instructors in the profession who have packaged their training into a more lucrative business that’s based on vision, commitment, showmanship and promotion.

With combined degrees in business, marketing and accounting, Gil and Vicki Ash have proved a formidable force in driving forward the market for shotgunning lessons as evident by their latest venture, the OSP Knowledge Vault. Since starting the OSP Shooting School in 1992, they have contributed mightily to the transformation of instructions from a provincial backwater into a polished and professional occupation. From the OSP Knowledge Vault: Click on the image to watch a video of Vicki Ash that demonstrates the potential for visual confusion when playing the muzzle of your shotgun too close to the target.

For the Ashes, all of their research and field work is based on the singular question of “why?” Why did you hit it? Why did you miss it? The question “why” is woven into their discourse. The Ashes believe that if you really know why you missed a target, then you can learn how to fix it. Answering “why” is the central premise of the OSP Knowledge Vault. Ultimately, through understanding “why” the Ashes believe you can make greater strides in correcting yourself and improve your performance. (By the way, OSP stands for Optimum Shotgun Performance.) Consequently, the new OSP Knowledge Vault organizes their books, articles, blogs and videos in a searchable web site compatible with just about any device from desktop PC to smart phone.

If you’re one of the 2,000 people the Ashes teach each year, you’ll appreciate full access to the OSP Knowledge Vault. Forgot that tip they gave you about quartering targets? Search for it on their new web site via your smart phone as you queue up to take a screaming true pair. For example, check out the partial results below for the search “quartering targets” on OSP Knowledge Vault. Screen shot of partial results from the OSP Knowledge Vault when you search the site for the term “quartering targets.”

The cool factor swings into action with the OSP Shot Simulator™ of 2D and 3D simulations detailing wing and clay shots with or without voiceover instruction. These simulations capitalize on Mr. Ash’s Bachelor of Science degree in business and photography and previous 23-year career as a professional photographer serving clients such as Exxon, Dow Chemical, Dupont and Honeywell. From the OSP Knowledge Vault: The animated character “Brian” demonstrates gun and eye placement on a crossing target. The green represents the muzzle, the red is your eyes.

The simulations on the OSP Knowledge Vault take two forms: full computer animation with a virtual shooter named Brian, while the other is a fusion of animation overlay on actual videos of wing and clay shots. They also use the ShotKam on dove shots to teach lead. The Ashes collaborated with a software company to define the specifications of the simulations.

Ultimately, the objective of the simulations is to increase target focus, both at the conscious and subconscious levels. In particular, they aim to resolve the ongoing struggle between barrel awareness, target attentiveness and target lead — with the goal of relegating the barrel to a soft periphery and the target honed to laser concentration. From the OSP Knowledge Vault: The animated character “Brian” demonstrates a left-to-right dove shot. The green represents the muzzle, the red is your eyes.

Fundamentally, they believe most of the heavy lifting in shooting clay and feathered birds should be done by your retinas, and they have spent years studying ophthalmology, opthoneurology and vision therapy. Through their research, they have synthesized how the eyes, mind and body function together. Gil and Vicki Ash insist that shotgunners must learn about their eyes, mind and body and moreover how those elements instinctively collaborate for consistent results.

As Mr. Ash explains “If you focus on the target, retinal processing will subconsciously tell you what the lead is, and provide the gun speed that matches the target speed. Current science has proven that the retina begins the process of determining the lead, but then the visual processing system of the brain takes over and gives the subconscious the necessary lead. That’s why we created a series of animations to explain where your eyes need to be. The animations show you what it really looks like and accept the perception until it becomes routine.”

The Ashes expect to add dozens more videos, simulations and articles to the OSP Knowledge Vault each year. Development and refinement continue in the simulations through their alliance with a software developer.

CLARIFICATION: PLEASE NOTE THAT SHOTGUN LIFE MIS-IDENTIFIED THE CAPTION IN TWO IMAGES. WE SAID THAT THE GREEN LINES REPRESENTED THE EYES AND THE RED LINES THE SHOTGUN MUZZLE. IN FACT, THE RED LINES REPRESENTS THE EYES AND THE GREEN LINES ARE THE SHOTGUN MUZZLE.  ALSO, IN THEIR LONG AND SUCCESSFUL CAREER, GIL & VICKI ASH HAVE ACCUMULATED 60,000 HOURS OF SHOTGUNNING INSTRUCTIONS. OUR APOLOGIES FOR THE ERRORS.

Irwin Greenstein is the Publisher of Shotgun Life. You can reach him at This email address is being protected from spambots. You need JavaScript enabled to view it..
Useful resources:
The OSP Knowledge Vault web site
The OSP Shooting School web site

More in this category: « The Confessions of a Target Geek Jack Bart Tests the Revolutionary ShotKam »
back to top
© 2007 - 2022 SGL Media LLC